SomAgg combines the annotated somatic vcf files generated by Strelka and annotated with CellBase. Each tumour sample has a matched germline, both deep whole-genome sequenced with an average coverage of 100x and 30x, respectively. Few patients had more than one tumour sample sequenced.

Strelka FILTERs flag the following germline variant calls as NOT PASS, they are nonetheless included in the single vcf files and somAgg:

Strelka FILTERs flag the following somatic variant calls as NOT PASS, they are nonetheless included in the single vcf files and somAgg:

The annotated small variant vcf files used as input have been decomposed. The annotated single vcf files are generated from the somatic small variant vcf files (somatic_small_variants_vcf_path in cancer_analysis) generated by the variant calling pipeline, which comprises Strelka2 and vt for the decomposition. In orther words, the somatic variant vcf files are the ones decomposed, which means that no multi-allelic entries are found, because each multi-allelic is represented by 2 or more bi-allelic variants. The decomposition procedure is done in three steps by vt as presented here:

2. Split records with multiple alternate alleles into multiple bi-allelic records an e.g. 1/2 genotype will be split to 1/. and ./1. The flag -s (“smart”) option makes INFO and FORMAT fields of type A and R to be retained and decomposed appropriately.

3. Left-align indels and trim redundant bases. The “non-ambiguous” reference genome is used. This file only contains A,T,G,C and N characters.

All 16,341 samples included in somAgg have successfully passed our internal sequencing and interpretation pipeline. These sample are listed in the LabKey table cancer_analysis. Some quality control statistics for these samples are provided below.

The vast majority of the samples has been collected using surgical resection.

As expected, we see an increased AT drop-out for FFPE samples, but overall the vast majority of samples have good mapping rate. 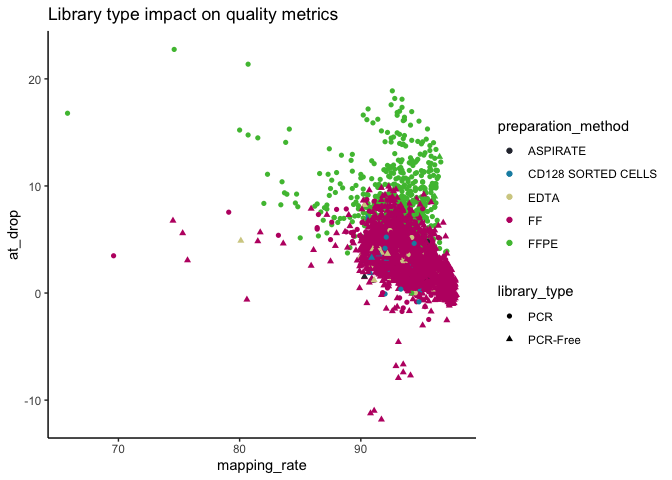 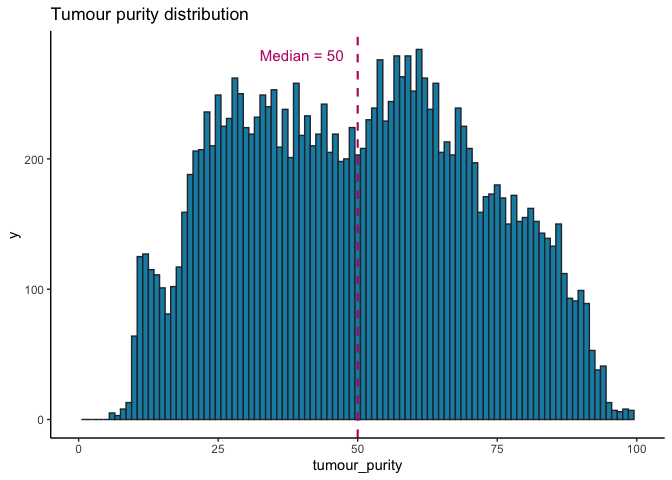